I was at a business breakfast recently listening to Ian Narev, former CEO of Commonwealth Bank of Australia, speak about leadership.

He’s a warm and engaging man who doesn’t seem to take himself too seriously (as I find with many of our New Zealand brothers and sisters) and during his talk he referenced Rudyard Kipling’s famous poem If. In particular he was referring to the lines in the first stanza:

If you can trust yourself when all men doubt you,
But make allowance for their doubting too;

and it occurred to me that the dichotomies Kipling uses throughout his poem are a reflection of Dan Harrison’s Paradox Theory. About a true strength existing when there is balance between two seemingly opposite traits. In this case having certainty and conviction in your opinions while being open and reflective to any new information that comes in. To be willing to be wrong about what you thought you knew. To have a balanced perspective.

Below is the Opinions paradox which is one of the component behaviours of Harrison’s Paradox Graphs. The Paradox Graphs display twelve leadership behaviours commonly used in business and the dynamic behavioural flips that can occur under stress. When it comes to Opinions the two paradoxical traits are: 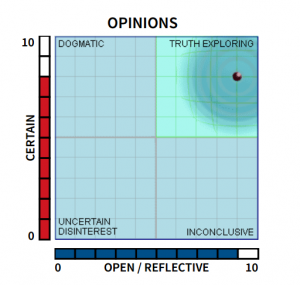 Certain – the tendency to confident in one’s opinions

Open/Reflective – the tendency to reflect on many different viewpoints

Ideally we want to be strong in both these traits which we refer to as Truth Exploring.

If we are high Certain, low Open/Reflective we tend to be Dogmatic and refuse to change.

If we are high Open/Reflective, low Certain we tend to be Inconclusive, spending our time looking for new information without actually forming an opinion ourselves.

If we are low in both traits we refer to it as Uncertain Disinterest. The individual is not sure and doesn’t care.

Think about a leader or manager who displays one of these imbalances in being dogmatic, inconclusive or disinterested and the effect they have on the engagement levels of their team. For example, the dogmatic leader refuses to listen to anyone else’s ideas. I know I wouldn’t be hanging around in that workplace too long. Most high performers won’t either because they have other options. The cascading effect of poorly trained managers and their effect on employee turnover is well known.  It leads to good staff leaving which is incredibly expensive and disruptive for the business.

I love the ability of Paradoxical Leadership to get to the core of our default behaviours, the self awareness it engenders and the common language it gives colleagues. I still look at my own Paradox Graph regularly usually with that awkward self acknowledgement that sometimes I have slipped back into behavioural patterns that are less conducive to my success. This is the little nudge I need to get back on track. The truth is these behaviours are just habits and we humans have the ability to choose to create new habits.

So thank you Mr Narev, Mr Kipling and Mr Harrison. I’ll keep aiming to develop a better version of myself. To be a better man.